Which one do you have? Did you also do the camshaft and crankshaft seals? How hard were those?
Click to expand...

Yes, I did the cam and crank seals, and the Aisin kit I ordered from RA came with them, plus 2 long, thin seals for the water pump-to-cover, as well as 12 rubber bushings for the cover bolts. Nice!

Here's the radiator upside-down with the original hose. That white plug in the center is the drain.

If you intend to replace all of the radiator hoses, you will need a total of 4 hoses. The small bent one goes from the t-stat to a pipe that is bolted to the cover, then to the radiator. The short one that is the smallest diameter (70982 in that image) was actually a molded hose that was cut to length. It is the bypass from the t-stat housing to the other outlet housing.


You install the bypass hose behind the upper timing belt cover, so if you're doing the t-belt, do the bypass hose first, then install the rear cover, then the t-belt, etc. You can see it installed above the water pump, but only the bottom part. The other end goes to the housing whose outlet you see at the very top/center of the image.

You can also see the seals are installed. I put some lithium grease on them to keep them from being dry on the first start.

Satito said:
I strongly recommend changing the bypass hose (the elbow off the top of the thermostat housing) when you get a chance. They get neglected and as such are a common leak spot.
Click to expand...

I agree 100%! When I did mine, I remarked to a buddy just how poorly designed it is, with it hidden behind the t-belt cover where it's almost impossible to inspect, and extremely difficult to work on.

After cutting my molded hose to the same length as the original, I installed it on the upper outlet with the spring clamp's ears facing up, then shoved it down onto the lower outlet and aimed those ears forward.

I have to say that the water pump design is less than stellar as well. To remove it, you have to remove the timing belt because the pump forms part of the side covers, and it's too long to snake it out. I just don't see or understand why it needs to be part of the cover, since the housing is just to keep most debris off of the timing belt. To add insult to injury, if the water pump leaks, the coolant pees right onto the belt, making it more likely that you'll want to replace it.

I guess no company or country has engineers with a monopoly on short-sightedness.

KyTerra said:
Well, got the snorkel hooked up fully, ROXterra MOLLE panels in the rear quarter windows, YELLOW fog lights finished, light bar on the bumper mostly finished (need to reseal it- the factory seal let in moisture and now it is fogged up slightly in one corner) figured out where to mount the aux reverse lights in the bumper, vent visors installed, CB antenna dug out of parts pile and ordered a new mount with fresh cable for it and installed all 4 of the Rancho RS500 shocks. Thursday is full front brakes (pulls to the driver side pretty heavily) and hopefully 2" B/L, since I pick up my 33"s tomorrow (Dick Cepek EXTREMEs on black "D" window rims). Still waiting on my 2" shackle kit and short studs for the headers....
Click to expand...

You don't need pretty rims if all yer gonna do is get 'em muddy! LOL

Would love to see some pics of the yellow fog lights and reverse lights. While you're at it, might as well toss in some pics of all the other stuff, too.

On mine, I just attach a USB cable, then navigate to the images I want, and drag them to my computer.

The nice thing about solid axles is that you don't need an alignment if it's built right. Both wheels are perfectly parallel and have no camber unless there has been some damage from overloading or striking something.

Watch out! You could be throwing your whole life away.

Or it could be the best thing you've ever done.

Even though I didn't actually go up or down this one particular path, I backed up to it with an Inclinometer app on my phone and had my buddy in the rear seat snap a pic of it. According to that, it looks like I'm 26° nose down. I know this for sure - I couldn't reach my phone because my seatbelt was locked and wouldn't loosen up!

30A circuit breaker powered off of blank spot in underhood fuse box. Didn't have enough 12 gauge wire, so I doubled up some 14 ga. That long yellow thing is a short wire that is an emergency disconnect, just in case. (I had an issue years ago and being under the hood with air horns blaring is not fun!)

Output is split to power the air horns and the twin electric horns that replaced the single stock horn. Wired so I can disconnect the "Y" and swap to have only the electric or only the air.

They are very loud!

When I lock the doors, only the electric is quick enough to make a normal 'toot'. When I pressed the red emergency button on the fob, noise happened.

KyTerra said:
Nicely done, especially with the "emergency" disconnect. Maybe consider a "half-moon" shield to help keep debris out of the bells?
Click to expand...

Good idea! I just ordered a pair. Arriving in less than 2 weeks. That ought to be enough time to finish the next transformation from belt-driven fan to electric, and bypassing the trans cooler in the radiator.

KyTerra said:
Your more than welcome. I've had my "Cannonball Run" trumpets on my Volvo get saved by these things. (Buzzard in Nevada found it, at about 15MPH... bent the cover, tweaked the bell. I was pulling out of the fuel pit when it happened)
Click to expand...

I received the "2" covers and found that there was only one! The Amazon page showed only 1 image with 2 covers: one right-side-up and the other upside-down. Nowhere did it say "one" item, but it also didn't say "two" items, so the only count I could see was the image. I feel like I got taken. Not gonna send it back, and not gonna order a 2nd one. I ordered a pair of sox that can be used on velocity stacks but are also used on air horns. They keep stuff like water and mud out, let air pass, and don't scratch the finish. A bunch cheaper, too! This chrome cover has a gap of one inch (I measured it), so a lot of mud could get in there. (Mine are mounted sideways.)

Sorry to hijack the thread, but figured an update was in order.

2004 Xterra XE 4WD Auto 3.3L NA V6
Joined Aug 3, 2020
·
2,858 Posts
I was able to get a 6-circuit fuse box wired up and installed on the driver's fender. There's a bracket with the emissions valve on it and it has a lot of extra room compared to anywhere else under the hood. When it's done, there'll be a manually-resettable circuit breaker near the battery that provides power to a distribution block that is mounted behind the new fuse box. It has 6 individual wires are providing power to the 6 fuses, so each circuit isn't daisy-chained with any other. Then each fuse runs to a relay. I ran 14-ga from the distro block to the fuses, and from the fuses to the relays. The NO and NC from the relays are also 14-ga, and the coils are 16-ga. If I had some 18-ga I'd use that for the coils, but I don't...

Each circuit has its own split loom with red for NC and white for NO, plus one of 6 different colors for the coil. Both coil wires are the same color since they're not polarized. This aids in identifying which circuit is which when it comes time to finish hooking it all up.

The wires are just hanging loose for now, including the main power wire, which is about 12 feet of twin 10-ga wires. Nobody in town had 8-ga or 6-ga! Covid has really messed things up, eh?

My plan is to have six 3-way rocker switches in a small box above the inside mirror where the previous owner left 2 studs from a CB radio. The 6 circuits will be 4 fans (trans cooler, AC, and 2 on the radiator) plus some Diode Dynamic amber fogs on the front and white fogs cut into the rear end caps. Each switch will have its own indicator light: the 4 fans will be red, fog lights amber, and reverse lights blue.

Switch positions will be Auto - Off - On for all circuits except the front fog lights. I might change my mind and wire them to come on with the low beams in the Auto position, but that seems like overkill. The reverse lights I plan to wire so that Auto turns them on with the normal reverse lights, and On will be enabled only when in P or N, which will make it impossible to turn them on while in drive.

I'm still waiting on some of my electrical parts to arrive, so I'll work toward getting the fans and trans cooler mounted next weekend. We're expecting a wet week so my plans could change.

KyTerra said:
I've started turning mine into a "Vinyl Whore". LOTS of stickers on both quarter glasses, starting to do the rear glass, as well... (where did you get that box from, again?)
View attachment 77615 View attachment 77616
Click to expand...

Nobody said it had to be pretty, just functional. I'll round the corners a bit more later on. Yes, the holes line up. Mostly. Kinda.

KyTerra said:
Yep. The nice, highly water resistant, fully potted 6 circuit fuse and relay protected box. THAT one...
Where'd you get it?
Click to expand... 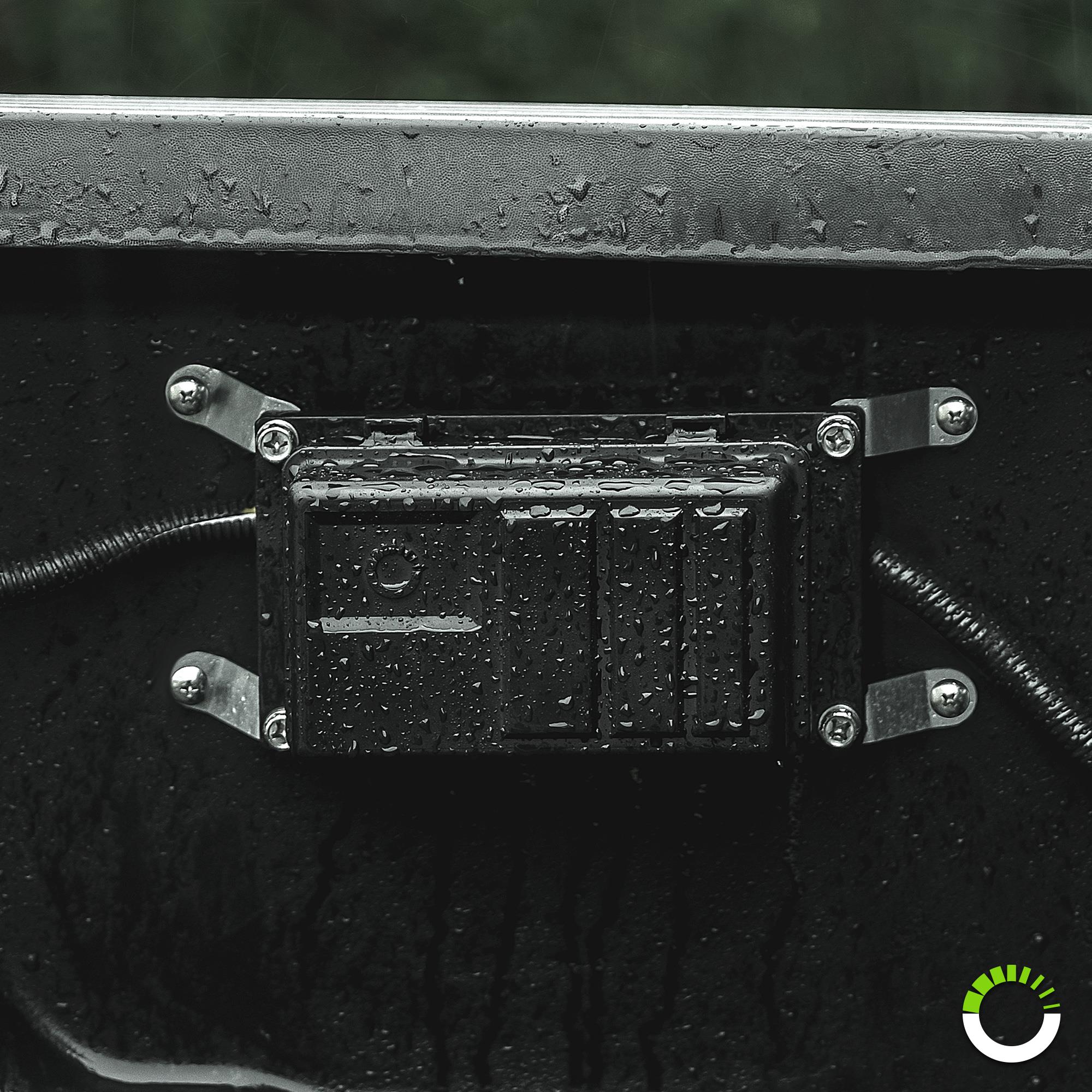 Another great source of electrical items is Del City:

KyTerra said:
I thank you, however, my wallet condemns you, sir.
Click to expand...

Just a kid in a candy store.

Me, not you, but probably you, too!

I still need to tighten up all the bolts. The vertical bars are ¾" square steel tubing with a short spacer between them and the body. The angles are 1½" x 1½" and the flat strap is 1½". All fasteners are stainless ¼-20, with a flat washer on both sides of the attachment. A few bolts had to be cut for clearance.


Passenger's side vertical bar. Wire above AC line was re-routed.